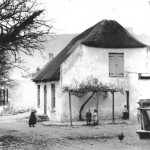 This is probably the oldest building in the Bokaap, and was the homestead of the Schotsche Kloof Garden. It was granted to Andries Thomasz in 1707. In the 1724-estate inventory the owner Christina de Bruyn, described it as single storey. Jan de Waal must have converted the house into a double story soon after aquiring the property, because in the 1768-estate inventory, it was described as double storey.

This entry was posted in Place, Uncategorized. Bookmark the permalink.