Sir Herbert Baker was the most renowned architect to have practised in South Africa. He had his name connected with the Empire Builders and was knighted for his work in this respect. In New Delhi, India, he worked in conjunction with one of his closest friends, Sir Edwin Lutyens (designer of the Johannesburg Art Gallery)

Born at Cobham, Kent, Baker was one of a family of 12. He was educated at Tonbridge School. His father arranged for him to be apprenticed to his uncle Arthur Baker, at a reduced rate. He also attended classes at the Architectural Association of the Royal Academy, where he met the famous architects of the day. He was a pupil for a while of the greatest Victorian Gothic church designer, Sir George Gilbert Scott, and it may well have been Scott who first aroused Baker’s interest in coming to South Africa, for the Scott family had been working on the new spire of Grahamstown Cathedral. During all his student days Baker had spent much time sketching ancient buildings, going on sketching expeditions not only in England but also on the Continent.

Before coming to Cape Town in 1892, Baker had worked for several years under Messrs. Ernest George & Peto, a distinguished firm of domestic architects practising in London at that time. He was a student at the Royal Academy, Burlington House, and at the examination for the ARIBA he passed first, thereby becoming Aspitel prizeman for the year. Baker then studied architecture on the Continent, prior to sailing for South Africa.

Aged 28, he arrived in Cape Town in order to assist one of his brothers in buying a fruit farm.

Shortly after his arrival he met Cecil Johm Rhodes at a dinner party. Soon afterwards the young architect met Rhodes again on the slopes of Table Mountain, when Rhodes was having his early morning ride. He invited Baker to come to his house the following morning, as he wished to discuss the restoration of his old house-Groote Schuur. For the next two years, Baker carefully restored this Cape Dutch house to its former beauty. He rebuilt it, to his own designs.

During the Groote Schuur era, Francis Masey entered into partnership with Baker. Masey had come out from England to join the Public Works Department. He studied under Alfred Waterhouse R.A. and qualifying for his ARIBA, also winning a number of RIBA honours. Among them the Soan Medallion for 1887, the Owen Jones Studentship Medal for 1889, the Tite Medal for 1887, and the Owen Jones Medal of Merit for 1891.

The result of his Victorian Gothic training can be seen in the cumbersome Edwardian Gothic of St George’s Cathedral in Cape Town and at the opposite end of the scale the romantic small church of St Andrew’s, Kildare Road, Newlands. Masey took a keen interest in Cape Dutch architecture and was President of the National Society for the Preservation of Old Buildings.

A junior partner of the firm who joined simultaneously with Masey was P .K.Kendall ARIBA, an Australian by birth. Before entering his articles in London, Kendall had undergone a year’s course with a contractor, dividing his time equally between office and workshop; then followed a study of technical subjects at King’s College and University College. His articles were served under Prof Roger Smith and later he became one of the chief assistants to Sir William Emerson of Westminster. He distinguished himself in the South Kensington School of Art and passed the examination of the RIBA, qualifying as associate in 1894. In 1896 he came to South Africa, where he worked with John Parker for a while before joining Baker’s firm.

The builders Mitchell & Mackie worked many times with Baker and his associates, eventually being one of the contractors to be employed on the Union Buildings in Pretoria.

Baker worked as resident Architect on the Mount Nelson Hotel, at the top of Government Avenue. It was designed by the English firm of architects, Dunn & Watson, and is one of the few end-of-the-century hotels still in use. It was originally a private house, owned by the Ross family, built largely of material brought out to the Cape as ballast.

The new hotel building opened on 4 March 1899. Already ahead of the times, the designs for the Mount Nelson were clear and uncluttered. It is four stories high, with over 140 rooms (reception rooms, private sitting-rooms and bedrooms), all furnished richly and comfortably. The construction was thoroughly fireproof, electric light throughout, the most up-to-date lifts and ample refrigerating chambers. The handsome dining room opened out onto a conservatory whilst at the other end was a musicians’ gallery. The walls are oak panelled, and the moulded plaster ceiling with reliefs depicts from South Africa’s history. In the heyday of the mail ships, the Mount Nelson Hotel, represented more than a hotel to seasoned travellers. It was a way of life.

Opened only six months before the AngloBoer War began in 1899, the Mount Nelson quickly became the headquarters of the English. The scores of rich, young officers instantly christened it the Nellie – a name that stuck. The Castle shipping line, which built their Hotel to rival the Union Steamships’ Grand Hotel, on Adderley Street, had the rich and leisured class, very much in mind when designing the hotel.

Other works done during the 1890’s were alterations to the Observatory, and the remodelling of Kelvin Grove Country Club, which is certainly Baker at his most opulent. 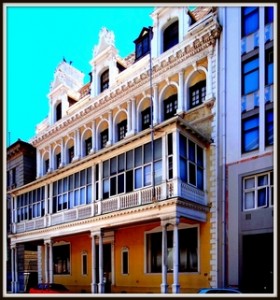 This also applied to Rhodes House, which housed the City Club at 189 Queen Victoria Street. Built in 1897, It was designed in the pictorial, late 19th century manner, which was fashionable in London when Baker was working there. This building has a fine timber balcony on the first floor looking across the street to the Gardens.

The City Club was modelled on a London City Men’s club, and was formed in 1878 with Sir John Molteno as president, but it was not until Cecil Rhodes was elected a member in 1890 that monies were made available for a new building. As Rhodes’ protégé, Herbert Baker was asked to organize an open competition for designs for a club building, the prize being £100. In the event, Baker won the competition! Costing in the region of £22 000 to build, every detail was of the best in both material and workmanship. Rhodes exhorted Baker to design meticulously with perfection in mind – even tasting the sand for salt to ensure that it was river and not sea sand.

Immediately after the Anglo Boer War Cape Town suffered a depression. Many people returned to the Transvaal and the port was no longer a focal point for troops and troopships. So, unlike Johannesburg, there are few buildings in the Grand Manner in this era.

Baker’s overall feeling for his particular era combined with technical knowledge, a meticulous eye for detail and, whenever possible, the clever use of local materials and craftsmen, made him one of the great architects of his day. Since the establishment of his firm in 1892, Baker had been erecting buildings that were forerunners of things to come in the new century.

1902 saw the erection of another commercial building, with narrow frontages on both Darling and Shortmarket Streets. Originally built for D.lsaac’s & Co, this building still stands.

The terracotta facades and wide windows are today dwarfed by the neighbouring buildings, but at the time of erection the most up-to-date methods were used, the construction being of entirely fireproof materials. The floors were of steel, cased in concrete. The facades were carefully designed in terracotta. Two of the best modelling studios in England were employed to carry out this work-Doulton of Lambeth and Burman Tofts Co of Leeds. The shopfitters were F. Sage & Co, and the builders, Hopkins & Co of Cape Town. 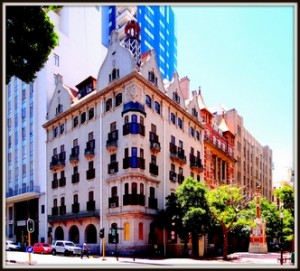 Next to the Bishop Gray monument, on the corner of St. George’s and Wale Street (125 St Georges Street), stands the Rhodes Building. It was built in 1902, for De Beers Diamond Mines.

This was one of the first of Cape Town’s modern buildings to be built of the coarse quartzite Table Mountain sandstone. The design too has a particular interest for it broke away from the usual kind of planning and treatment fashionable for office buildings in South Africa at that time. It was based on the lucid plan of the Roman palazzo, being built round a central courtyard and surrounded by arcades.

In the centre of the courtyard stands a fountain of Verona marble surmounted with a symbolic Zimbabwe reptilian-headed bird.

On the corner of Longmarket and Adderley Street is a group of Victorian Buildings. Today these facades hide a modern office block and parking garage. No 27 Adderley Street was designed by Sir Herbert Baker.

The Old National Mutual Building on Church Square, first known as the National Mutual Life of Australasia Limited, was erected in 1905. It was enlarged by the architects John Perry and WJ Delbridge between 1919 and 1933. Observe the 1905 on the left hand gable and 1933 on the right hand gable. The building style features both Cape-Revival style and Baker elements, with gables in the Flemish style.

Next to this building, in Spin Street, no.6 Church Square, was erected in about 1902. The teak panelled lift car dates back to 1913.

Inside the Parliament complex, on the left of Parliament Street, is the Marks Building, built in 1905. This was the beginning of a different, more scholarly classicism for city buildings in Cape Town. It was designed with solid, heavily rusticated stoned ground and first floors, orderly window openings on the long facade and a contrast of materials and weight at the ends which was much in keeping with new Edwardian Renaissance ideas. It features an attic storey and a row of square dormer windows in the roof.

The present St George’s Cathedral, at the cost of the demolition of Schutte’s graceful spire on Wale St. was built in 1900. The 13th Century French Gothic Style Cathedral was built of Table Mountain sandstone, quarried from Platteklip Gorge. In 1901, the Duke of Cornwall and York laid the foundation stone. (Later King George V).

The year 1900 brought another Gothic version in the design of the St George’s Grammar School, Cape Town, and the Diocesan College (Bishops), Rondebosch. The Collegiate Gothic was to be one of Baker’s most pleasing styles, for buildings to house the young should be comfortable, homely and lacking in the institutional feeling.

Though of a very different nature, the Rhodes Memorial was another landmark designed by Baker’s firm. Intended to fit into the landscape it was in fact made from the granite of the mountainside from the Kloof Quarries of Mr Stolenhoff. The contractors were J.R.McKillop. The Rhodes Memorial adorns calendars, souvenirs, postcards and photograph albums; whilst on home movie screens the family climb up and down the steps and gapes at the fabulous view.

Baker’s partnership with Masey terminated in 1909, when Masey went to Zimbabwe. He died there three years, of pneumonia. He was in his early 50’s.

First National Bank, Adderley Street. Sir Herbert Baker was at the height of his career when he designed what was then Barclays Bank. His reaction to the commission was not one of enthusiasm, for he remarked, ‘I really do not feel that I much want to do the work except for a rather natural longing to attempt to remove some 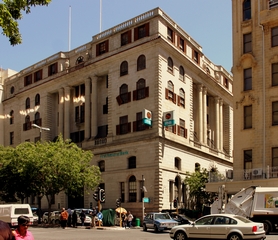 of the squalor of Adderley Street.’ It was designed in Baker’s London office, but carried out by the Cape Town architects, Forsyth & Parker. This was the last building that Baker designed in South Africa. It shows the approach of the mature architect, with the bold and dignified facade of grey granite and the domed banking hall within the great bronze doors. The sandstone that was used for the walls, were taken from a specially opened quarry near Ceres. The travertine and marble used for the walls and floors of the banking hall were specially imported from Italy. The furniture and fittings were also designed in London, but made in Cape Town.

With a vast number of meticulously designed buildings to his credit, he was finally laid to rest in Westminster Abbey in 1946, aged 84.