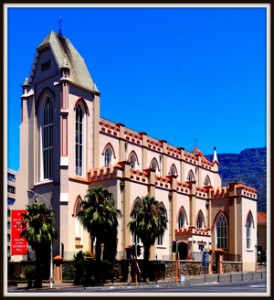 St Mary’s Cathedral is located on the historical “Stalplein” (Stable Square) opposite the House of Parliament.

Having been granted permission to build a Cathedral, Bishop Griffith purchased a piece of land, in 1839, from Baron van Ludwig. The foundation stone was laid on 6th October 1841, and consecration took place on 28April 1851.

It was designed by the architect Otto Hager, in the offices of Carel Spaarman, who was responsible for the design of quite a few churches in the Cape.

Its design reflects a reserved Neo-Gothic style, with characteristic pointed arches. The building measures 37.5 metres by 19 metres on the inside, and has a ceiling height of 20.metres.

Funding of the church came from as far as Calcutta, Mauritius and Pernambuco in Brazil.

When the building was 5.5 metres high the builder, Mr Skirrow died, and Mr James Begley, who was a member of the congregation, completed it.

In 1926 the tower was added to house a bell donated to the cathedral. The sanctuary was remodelled in 1947. The altar of black Italian marble was completed in 1950, as a memorial to parishioners who had lost their lives in the Second World War. Inside the porch is a large painting of the crucifixion presented by Em111 in 1869. In 1951 the Archbishop McCann consecrated St Mary’s as a cathedral.

In 1997 a process of upgrading and restoration started. Lighting became an important design tool. A 5-metre chandelier, named the “Crown of Thomas” was installed. This accentuated the many components of interest such as the altar, paintings, Stations of the Cross and statues. Strategically placed spotlights enhanced functionality and also created an atmosphere of calm in the church.