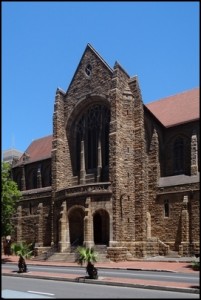 At first the Anglicans had no bishop in the Cape and had to rely for confirmations and other episcopal proceedings on the services of visiting bishops on their way to India. From 1807 until 1834, English services were held in the old Dutch Reformed Church; the small Anglican congregation had not been able to afford a church of its own.

In 1827 the Bishop of Calcutta, on a visit to the Cape had asked the Acting-Governor for the grant of an acre of ground, and in 1829 an ordinance had given official sanction to building a church at the lower end of theCompay’s gardens. The design of the new church had been chosen from a set of drawings obtained from England. The choice had been the Church of St. Pancras in London, a building of classical beauty and dignity completed in 1822.

The St George’s Cathedral was designed by John Skirrow and built by Herman Schutte. In order the fit into allocated ground, the Colonial Secretary, Colonel Bell, had altered the plan, by making the building longer and omitting the porches. The Governor, Sir Lowry Cole, laid the foundation stone on St. George’s (Patron Saint of England) Day 23rd April 1830. To mark the event Berg Street was renamed St. George’s Street. The building was completed at the end of 1834.

The church attained the title of Cathedral in 1848, when Dr. Robert Gray, the first Bishop of Cape Town, arrived in Cape Town.

Towards the close of the 19th Century it was decided to build a new Gothic cathedral. Sir Herbert Baker and Francis Massey designed it, in 1897. The 13th Century French Gothic Style Cathedral was built of Table Mountain sandstone, quarried from Platteklip Gorge. In 1901, the Duke of Cornwall and York laid the foundation stone. (later King George V).

Dates in connection with the building of the cathedral: