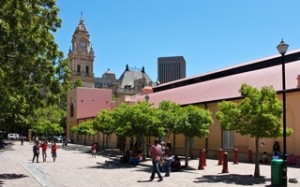 In 1884 the Voluntary Drill Hall was erected on the northeastern corner of the Parade. The first building on this site had been a hospital begun in 1772, chiefly for sick sailors. The area, bounded by Ziekestraat (Corporation Street), Buitenkant and Keizersgracht (Darling Street), was known as Hospitaal Plein until the hospital building was converted for use as military barracks from the late eighteenth century. From then on it was known as Caledon Square and in 1840 was taken over by the municipality.

The foundation was laid on 2 October 1884 by Thomas Upington, then Prime Minister of the Cape Colony It was designed by James Tennant of the Royal Engineers and a Mr Kitch was the building contractor The building was inaugurated on 15 December 1885 by Sir John Gordon Sprigg In 1889 the Drill Hall was enlarged to its present size by the well-known Victorian architect, Anthony de Witt of the Volunteer Engineers. The Drill Hall was designed to serve the volunteer forces of the Western Division as headquarters, as an indoor venue for instruction and for drilling in bad weather. 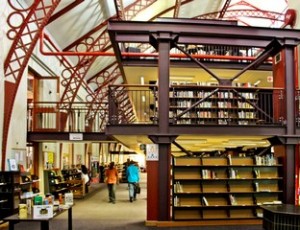