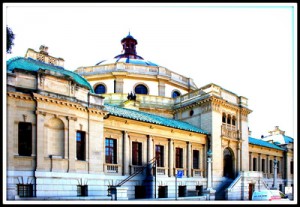 One of the finest Edwardian buildings in Cape Town can be found at 62 Queeen Victoria Street. Today it is called “The Centre for the Book”. It was originally built to house the University of the Cape of Good Hope. This University examined the students of several colleges, like Victoria College Stellenbosch, and the South African College, Cape Town and others, which today are Universities in their own right.

It was designed by British architects W Hawke and WN McKinley. Sir Walter Hely-Hutchinson laid the cornerstone of the original block on 24 February 1906.

Unfortunately funds were insufficient and the design of the building was curtailed and modified. The twin towers, were not built as shown on the original drawings, nor was the drum of the dome so lavishly decorated as shown.

The Ceremonial Hall was based on a plan of an ancient Greek theatre and the dome above rose to a height of 56 ft. The base of the exterior is of Paarl granite. Spanish tiles cover the roof and the dome is coated with copper and topped by a cupola of teak.

An annex was built in 1910 and the cornerstone of the new university hall was laid on 5 November 1910 by the Duke of Connaught and Strathearn The entire building was inaugurated on 14 February 1913 by the then Governor-General, Viscount Gladstone of Llanark.

In 1918 the Cape University became the University of South Africa (UNISA) and shortly afterwards moved its headquarters to rented premises in Pretoria. Unisa retained ownership of the building, until it was sold to the State in 1932 to be the new home of the Cape Archives Depot.

The Archives moved out in February 1990, to new premises at the site of the old Roeland Street goal. The building was proclaimed a National Monument in 1990. As early as 1987, the Department of National Education had offered it to the South African Library, which planned to use it to house its special collections. The building nevertheless houses manuscript collections and several other valuable collections in environmentally controlled stores, as well as the Library’s Conservation and Book Repair workshops. The ground floor is managed by a project of the National Library, the innovative “Centre for the Book” which promotes access to libraries, the writing, illustrating and publishing of South African books in all languages which encourages both diversity and nation building at the same time as ensuring that all South Africans are able to share in the pleasure of reading.

Organisations involved with literacy, reading, publishing, and allied fields make use of the superb facilities of the building for conferences, symposia, training courses and exhibitions. The Centre for the Book has been made use of in many different ways. A film shoot had a lion stalking through the main hall, while the King Commission of Inquiry into match fixing in South African cricket had the building labelled for a while as the “Centre for the Bookie”.