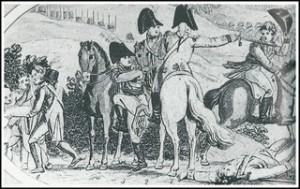 In July 1805, a fleet sailed from England to recapture the Cape. Janssens, who, from the time he learned that the English and French were again at war, knew that an attack would be made on the Cape, had done his utmost to strengthen the defences of the Colony. But he had nothing like enough forces at his disposal.

On January 4, 1806, the British fleet dropped anchor between Robben Island and the shore.

The fleet was under the command of Sir Home Popham, the troops under General David Baird. The next day the troops, all except a few regiments who had been sent to Saldanha Bay, landed on Losperds Bay (Melkbos Strand), just north of Blaauwberg Strand.

Meanwhile General Janssens set out to meet them with an army of two thousand men.

They spent the night at Rietvlei on the 7th, and advanced towards the Blaauwberg the next morning. It was in the height of the summer, and the heat was disabling. Janssens had hoped to occupy the heights of the Blaauwberg that morning, when he saw the British marching down them towards Cape Town. He spread his army out in a line facing the British advance. Both sides opened fire. Almost at once the mercenaries (Waldeckers), who formed the main strength of the regulars, fell back. The French, the burghers and the coloured troops stood their ground as best they could, but the position was hopeless.

The scattered army was reformed at Rietvlei. (Table View)The Waldeckers were ordered to return to Cape Town. The French troops returned to their ships. The remainder fell back with Janssens to the Hottentots Hollands. (Somerset West)

Meanwhile General Baird marched on Cape Town, supported by the fleet. As there was not the slightest hope of defending the city, Colonel von Prophalow, who was put in charge to defend Cape Town, offered no opposition. On January 10 the capitulation was signed at Papendorp, now Woodstock. The castle and forts and all property of the government in Cape Town was to be surrendered to the British. The regular troops and the French were to be given up as prisoners of war .

The burghers were to return to their homes.

All rights and privileges of the colonists were to be preserved, and the paper money in circulation was to remain official tender until new arrangements were made. The next day a proclamation was issued requiring an oath of allegiance to the English King, and forbidding anybody to help Janssens’ army in any way.

On January 18, after some difficulty in coming to an agreement on the terms, Janssens signed a capitulation, which finally surrendered the whole Colony to the British.

On March 6, the Dutch Governor, after sending a letter to General Baird recommending to his care the inhabitants of the Colony, set sail from the Cape with members of his administration and the remnants of his army.