The Lutheran Church, Martin Melck House and Sexton’s House This unique group of eighteenth century buildings stands in Strand Street, higher up and across the street from Koopmans de Wet House. These buildings were designed as an architectural entity to meet the needs of the Lutheran Church.

At first the Dutch East India Company allowed freedom of worship only to members of the Dutch Reformed Church.

From early on the German, Danish and Scandinavian officials and free burghers who belonged to the Lutheran Church, petitioned in vain, to the Lords Seventeen for permission to erect their own church, and provide for the services of their own minister. It was during the regime of Governor Ryk Tulbagh, that Martin Melck, a member of the Lutheran Church, succeeded unobtrusively in starting to build the church.

Martin Melck came to the Cape in 1745 as a soldier in the Company’s service. Four years later he became a free burgher and married Margaretha Hop. By this marriage, he became the owner the show farm Elsenburg and soon became one of the richest and most influential wine- and stock-farmers in the colony. He bought a plot in the fashionable Sea Street (Strand Street). On On 6th April 1774 he erect a building which he described to the government as a warehouse. It measured 28,6 m long by 19,5 m, wide, and was built like a church with a domed ceiling, rows of thick, rectangular columns and large English sash windows. 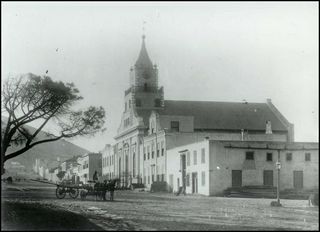 In 1776 the hall was transferred to the congregation by Martin Mlelck and used for holding church services. It already contained an organ, a communion chalice and a lectern in the form of a swan with outstretched wings the symbol of Lutheranism, and another swan was proudly displayed above the entrance.

In 1779 the Lords Seventeen decided to give the Lutherans their own church and in the following year Andreas Kolver of Rotterdam began his ministry at the Cape as the first Pastor. During the next four years considerable improvements were made to the hall, but it was mainly during the year 1787 to 1792 that the building was transformed and beautified. The leading Cape sculptor of the time, Anton Anreith designed the front elevation. His main contribution was the decoration of the interior with his excellent woodcarvings. The most important of these works were the magnificent pulpit supported by two great male figures and the choir-stalls, with a carving of King David in high relief. The consistory was added during this time. In 1818 the church had to be rebuilt quite considerably, because of the poor condition of the walls and the roof.  A spire was also built.

The new building was inaugurated on 20th December 1820. There have been few alterations to the church since that time. Anreith’s incomparable pulpit, the historic old pews, the lovely copper basins and font enhance the sense of devotion. Here the Church Archives and the valuable communion plate are also preserved. 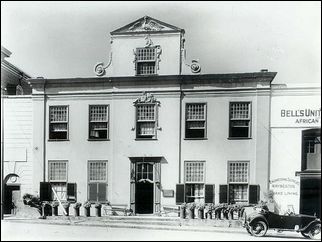 When he built the “warehouse”, Martin Melck kept the eventual need for a parsonage in mind and took care to have possession of the land to the east of the church.

He later transferred it to the church and after his death a parsonage was built on it. Building commenced in 1781. The architect was Louis Thibault. The sculptor Anton Anreith, was responsible for the moulded architraves of the middle windows, the swan on the front of the building and the carving of the front door.

The design shows the influence of the French Renaissance. It is one of the finest examples of eighteenth century architecture at the Cape and the only surviving example of a typical Cape Town house.

The first occupants of this large house were the Rev. Andreas Kolver, his wife Anthonia and their eleven-year old son. Except for minor renovations, the house stands today just as it did in Kolver’s time. It is characterized by large, spacious rooms, small Batavian bricks in the entrance porch and lobbies, broad teak boards on the ground floor and yellow wood on the upper floor, a great teak beam over the hearth and a cool, restful little courtyard behind the house.

Until 1891 the building served as a parsonage. The Church then let it as a house and in 1894 it became a boarding house. From then on it was known as Bloemfontein House, and in 1929 certain clubs and societies in Cape Town, fearing that it might be destroyed, formed a company to take over the lease.

Today it houses the Gold of Africa Museum. It has the largest collection of African gold artefacts, and has a working studio, gold boutique, wine cellar, and art garden.

This building at the corner of Strand and Buitengracht Streets was probably built at the same time as the Parsonage, 1779 and 1783. It was originally separated from the Church by another house which the Church Council let out to tenants, but the two houses were later built into one and the facade of the letting-house was retained. When the first Lutheran teacher, Lourens Ersey, arrived at the Cape in 1791, he lived in this house. He also acted as the sexton.