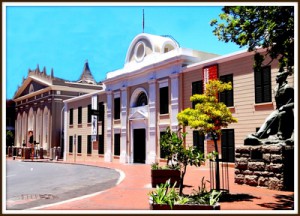 By 1658 there was an acute shortage of labourers at the Cape. Jan van Riebeeck tried to alleviate the position through the importation of slaves. Two small vessels, the Maria and the Hasselt, were sent to the West Coast of Africa to imprison slaves, but before the Hasselt returned with one hundred and eighty five slaves secured from the Slave Coast, the Indiaman Amersfort anchored in Table Bay. She had one hundred and seventy slaves on board. They were the survivors of two hundred and fifty slaves who had been taken as a prize from a Portuguese ship. These, together with those landed from the Hasselt, were considered to be more than sufficient for local needs.

On the 17th of April a school was established for the male and female slaves. To encourage the slaves to attend, they each received a small glass of brandy and two inches of tobacco, after school. (the beginning of the ‘Dop’ system)

All their names were written down, and those who did not have any, were given a name. They were also given decent clothes to protect themselves against the increasing cold weather. The strongest were put to work.

In his journal of: Wednesday, 28th August 1658, van Riebeeck reported that “It became more evident that the Guinea and Angola slaves, were inclined to desert, especially now that 14 slaves have run away last night, even from free sawyers, who treat their slaves better than any other freemen do theirs.

It was decided that, as a matter of urgency, the blacksmith should make an efficient amount of chains to shackle all the Company’s slaves, except the old and sickly men, females and children. The Free Burghers were encouraged to put in an application for these shackles.

The Eastern slaves, often Moslem and highly skilled in crafts, were too useful to be employed in agriculture. Burghers in the Town purchased them, usually at a high price; many were skilled craftsmen before they reached the Cape. Others, were taught such crafts as tailoring, bricklaying and baking by burghers and soldiers. 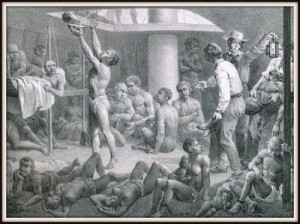 The proper housing of slaves in Cape Town presented a problem right from the beginning when the first slaves arrived. At first they were housed inside van Riebeeck’s fort; later a house called Corenhoop was built for them just outside the fort and in the 1660’s they were moved to a slave lodge nearer to their work, just below the Company’s garden, where the Slave Lodge now stands.

Soon, however, this lodge also became too small and in any case had fallen into such a state of disrepair that it was decided to build a large new lodge next to it in the form of a single-storied rectangle, round an open court on the land recently cut off from the Company’s Garden. It was to house some 500 to 600 slaves and was intended at the same time to supplement the defences of the Castle.

Work on this lodge was started in February 1679 but during that year, and before it could be completed, the old slave lodge, was completely destroyed by fire.

The “new” lodge was a strong, solid building; even today the building stands partly on its original foundations.

As might be expected, this lodge, which is nearly as old as the Castle, has undergone important structural and functional changes during almost three centuries of existence. Although it was frequently allowed to fall into disrepair and was often threatened with demolition. The building housed the Company’s slaves for nearly 131 years.

By 1716 it had again grown too small for the large number of slaves that had to be accommodated.

After much delay, it was at last restored and enlarged in 1732, and the possibility of adding a second storey was investigated. In 1752 it was once again renovated and enlarged. The northern wall (Bureau Street) was shifted up to the boundary wall of the churchyard, while the eastern wall was moved up to the moat of the Company’s hospital in the Heerengracht.

At this time a second storey was added and the building was given a flat, plastered roof.

By these alterations the building acquired it present approximate form, but other changes were to follow.

First, the front facing the Heerengracht, of, which the present facade is an exact replica, was designed by the architect Louis Thibault and constructed by the builder Herman Schutte.

In 1807, on the recommendation of the Earl of Caledon, most of the slaves housed in the lodge were sold. It was then decided to convert the building into government offices. This gave rise to important structural alterations, which were carried out in 1810.

On completion of the building, various public services were transferred to it in succession: the Supreme Court, the Master’s Office, the Receiver of Revenue, the Attorney-General, the Post Office, the Government Secretary, the Fiscal, the Bank, the Public Library and others.

The bringing together of so many services necessitated still more additions and on 31st January 1811, Thibault was instructed to design a courtroom in the middle of the building.

For a century it served as a courtroom. The building then became known as the Old Supreme Court.

Not only did the building become the seat of justice, it was also the cradle of the South African parliamentary system.

In 1885 an attempt was made to adapt it to the style of Parliament House by giving it Victorian balustrades and fenestration totally in conflict with the character of the Old Supreme Court.

In 1926 the Adderley Street facade was set back 13,4 m. The work was done most meticulously and it is claimed that the present facade is not only identical with, but just as good as Thibault’s work.

In 1950, the increase in vehicle traffic in modern Cape Town demanded that Bureau Street be widened. It was suggested that part of the Old Supreme Court be demolished to relieve the traffic bottleneck.

The Historical Monuments Commission, which had previously pleaded for the preservation of the building, now insisted that it be retained in its entirety and suggested that Bureau Street be widened by demolishing the consistory building on the opposite side.

In 1967 the Slave Lodge became opened its doors as the SA Cultural History Museum.

It houses collections of ceramics, toys, silver and textiles, as well as artefacts from ancient Egypt, Greece, Rome, the near East and the Far East. It also has the People’s Collection and displays on Cape history, Khoi herders, African money and slavery.

In the courtyard, the tombstones of Jan van Riebeeck and his wife Maria de la Quellirie can be seen. These tombstones were discovered in Batavia, where he was buried. It shows the three rings of his family crest, incorporated in the original Cape Town Coat of Arms.